Note: An error in how I calculated d in the equations herein was pointed out to me. I revised this post accordingly within a few hours of initial publication. 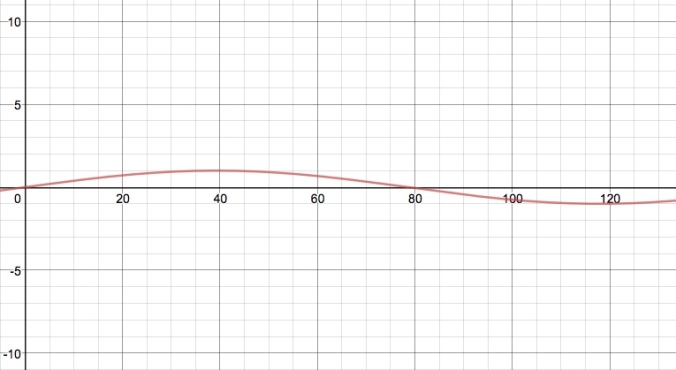 Hey, this looks like an overhead view of a car negotiating an 80′ slalom, doesn’t it?

We can even add cones and little picture of car and, wow, this gotta be a good model of what really happens, right? I mean, doesn’t it look right?

The first thing that bothers me about this picture of a sine wave is the way the change in direction occurs very smoothly and slowly along the path. This makes it look like there’s plenty of time and space to effect the transient from one direction to another, the center of which, the way I’ve drawn it (but maybe not how you’d drive it) is where the path crosses the horizontal axis. It makes it looks like transient response (TR) isn’t important. In reality I know that to go fast in a slalom in my Street class Corvette, or my Street class Porsche 944, or even in the Porsche Cayman I co-drove recently, I must turn the wheel absolutely as fast as humanly possible and then wait on the car to turn and develop peak lateral capability in the new direction. Then I have to again turn the wheel back the other way as fast as possible and very early or I’ll get late. Hmmm.

We’ll get back to this question of whether the sine curve is actually a good model a little later.

For now, let’s look at this expression T = (pi/8) x (d/G)^0.5  where T is the time between cones in seconds, d is the lateral distance to the outside edge of each car on each side of the path in feet that the car has to travel to miss the cones and G is the peak lateral acceleration of the car in gravitational units where the force of gravity on the surface of the earth is 1.00 G.

Notice that the distance between cones is not to be found in the equation.

Go ahead, look at it again to make sure. I’ll wait.

This tells us that the distance between cones is either of zero importance or not very important. We can’t really tell which it is because it might be a result of a simplification and I don’t have the original derivation to look at. We are going to have to trust that any such simplification was justified. If you think about it, it makes a certain sense: as the cones get farther apart the car can go faster and the time might just stay the same. Or pretty close to the same.

Is this number of 0.935 seconds in the ball-park of being correct? I’ve taken a lot of data on my car and, while reasonably close, I never do slaloms that fast. It takes longer, over a full second. I might not be consistently 2″ off the cones but I’m close. I think the problem is that I’m not reaching 1.2Gs in a slalom.

So I went back to find some recent data. Here are some slalom average peak to peak times in my B-Street Corvette from four different runs at an event with a 5 cone slalom consistently spaced at about 75 feet: 1.12s, 1.11s, 1.11s, 1.05s. (Each of these values is the average over 4 peaks within a single, long slalom.) Now if there’s one thing a GPS device knows accurately it’s time of day and time between events. The speed of the car was very consistent from entry to exit. (Luckily, there wasn’t an acceleration zone at the exit.) The last and fastest number happened to be my last and fastest run in the best conditions.

Using that last, fastest number of 1.05s and back-plugging into the formula indicates a lateral G of 0.95G. Peak G in a sweeper was consistently recorded at 1.3G by my 20Hz V-box, but peak G in the slalom was recorded as only 0.55G. So, while the V-box is missing the peaks in the slalom my car is still not achieving it’s steady-state lateral G peak in a slalom, based on the time between cones.

Some will, of course, say that I just can’t slalom worth a damn. Maybe, but I don’t think that’s it. I think it’s because I can’t change direction fast enough. (Yes, I’m blaming the car!)

This brings me to a key point: Many people look at the sine curve equation and come to the conclusion that if they make their car capable of cornering harder then they’ll be able to go through a slalom faster.

Even if this equation is more or less correct it doesn’t say that. Let me repeat: it does not say that.

What it says is that if you know the peak lateral g a car actually reaches in a slalom and you assume a sine curve path then you can calculate the theoretical time it takes to go from one cone to another.

Two key assumptions are at work here and we need to examine each of them.

2) the car can change direction (transition) fast enough that the car can reach it’s peak lateral G capability before it’s time to turn the other way.

We don’t drive slaloms like that, of course, but if we really wanted to make sure we reached maximum lateral G in each turn we could trade d for G or even velocity for G. This reminds me that we need to be cautious when we look at slalom data because some people (usually novices) do versions of exactly this. They drive farther off the cones and/or slower and wider so they really feel the lateral G at each peak and think they’re driving the car at it’s limits. They’re driving it to some limit, for a moment at least, but clearly not the fastest way through a slalom.

What I notice from looking at this picture is something else. It’s the way the radius of curvature changes. Here it is again with some annotations:

Notice that in the section labeled A the radius of curvature changes very rapidly on either side of the peak. if you start at the peak and then move either left or right the radius changes quickly from max curvature (minimum radius) at the peak to almost a straight line, i.e. a very large radius. Then in the section labeled B, which is most of the time between cones, there’s only a very slow change of radius. That is, the car is essentially driving without turning much at all. This behavior of the sine curve path is always there no matter if it looks like like y=1sin(.04x) in Figures 1 and 2 or y = 20sin(0.04x) just above. Figure 4 only exaggerates the effect. In a sine curve the radius of curvature is increasing non-linearly as it approaches and leaves the peak G point and decreasing non-linearly as it leaves the peak G point. We know this because of the way the path radius changes, given an approximately constant speed.

Is that what happens when we drive a slalom? I don’t think so.

Say you are going straight and suddenly, quickly turn the wheel. You’ve just done a step-steer test. What happens is that the lateral G rises rapidly and almost perfectly linearly. All the step-steer testing results (per ISO 7401) I’ve seen show a rapidly and basically linearly rising G level.

However, these tests are usually limited to only 0.4G to 0.6G. They do this because tires are generally linear in their response up to those levels. After that the tire and suspension bushing non-linearities begin to complicate things.

Us autocrossers don’t do step-steer tests, exactly, anyway. We can add or subtract steering angle as we please to try to get to max lateral G as fast as possible. (The step-steer test turns the wheel once, either by a human or a robot, then holds position.) So, we need to see what a real car with an experienced human driver can do.

Here’s a graph of the lateral acceleration vs. Time in a slalom of an autocross car at about the Street Prepared level on Hoosiers taken by an accelerometer at over 180Hz. 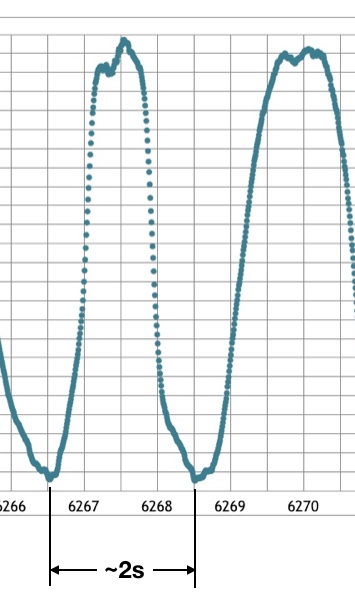 This is a plot of lateral acceleration, that is, cornering power, not the path of the car like in the previous figures. The peaks are between 1.1G to 1.2G and here the car is traversing the slalom at very slightly less than 1 second per cone. So this is faster than the time for my Corvette that I stated above. I don’t know what kind of surface it was, the temperature, or anything else about the situation where this data was taken.

You’ll have to trust me but the rest of the data shows steady-state peaks essentially the same as these transient peaks. That means that this car was just reaching its maximum lateral-G capability during the slalom. Actually, I’d say this car was more than reaching it’s steady-state peak capability, at least turning one direction, because on one side the G-peaks appear to be flattening out. A car turning at a constant G-level is following a circular arc.

I think I need to repeat that: a car turning at a constant G-level is following a circular arc.

Notice that the initial rise is linear for maybe 2/3rds of the time, then the rate of increase begins to decrease as the cornering limit is approached. I think this is the driver anticipating the limit and doing what he must to not overshoot and lose control. When the wheel is turned back to center (and beyond) the rate of decrease rapidly gets to an essentially linear rate of change which is carried all the way through zero. (There’s no peak of capability to negotiate where you might lose control of the car as the car approaches the zero radius point.) On the other side of zero the lateral Gs climb linearly again until the rate of change begins to decrease as the new limit in the other direction is approached and the driver tries not to overshoot.

What kind of curve has a radius that increases or decreases linearly with length along the path? I’ll give you a hint: it’s not a sine curve and it’s not a circular arc.

I first heard about Euler spirals in Adam Brouillards’ books Perfect Corner 1 and 2 which I talked about here.

A car that never gets to its steady-state cornering limit in a slalom is actually taking the path of a series of Euler spirals set back-to-back. So far I haven’t been able to draw it. (Sorry!)

A car that can reach its steady-state cornering capability within a slalom then transitions from an Euler spiral to a circular arc. The driver would attempt to maintain the circular arc until it was time to transition back the other way.  This is, once again, opposite of what is predicted/assumed by the sine wave model. Where the sine wave model says a car is changing radius at a maximal rate a car with fast transient response is doing the opposite and cornering with a constant radius.

The next installment will discuss more about non-sine curve slalom paths and I’ll introduce a testable, standard measure of a car’s slalom efficiency, which will of course be a good measure of transient response, yet not quite the same thing as raw speed through a slalom.