When it comes to transient response many of us have some strange ideas, me included. Let me illustrate this with one true statement and one false statement.

Statement 1:  The polar moment of inertia has a significant effect on how fast a car spins.

This statement is true.

Statement 2: The polar moment of inertia has a significant effect on transient response.

This statement is false.

Is the falsity I claim for statement 2 surprising to you? It was to me. I mean, whenever people talk about handling they always say something like a mid-engined car handles quicker and is more responsive because of the lower polar moment than a front engined car.

Witness a 2011 in-depth handling comparison between two Porsches, the Cayman R and the 911GT3, done by Car and Driver here in which the 911GT3 puts the Cayman R to shame. They mention polar moment, Center of Gravity, yaw rate and even a “new step-steering-input maneuver.” New to them, I guess. They ran a variation on ISO 7401 which had been around since 1988 and researchers and car companies had been doing step-steer testing long before it was codified into a standard. Why they couldn’t have just run ISO 7401 (it’s not difficult) I don’t know.

They talk about how the Cayman R’s 20 percent less polar moment of inertia “theoretically [makes] it easier to begin and end any cornering maneuver.” Unfortunately, they don’t actually know what they’re talking about. In fact, they totally miss the point of the step-steer test in my opinion.

Car and Driver does a step-steer test by turning the steering wheel 90 degrees and then reports the final rates at which the two cars turn in degrees per second. Who cares about that? The point of a step-steer test is to determine response time. The time it takes for the car to reach 90% of the final turning rate is the standard result of a step-steer test. That time value is the measure of transient response, not the turning rate that it finally reaches for a given angle of steering input at some later time. What they report is really just a simple measure of steering ratio!

I don’t want to pick on Car and Driver too much. The article I’m referencing is not bad, mostly because of the battery of tests they did. They meant well. One test is worth 10 theoretical analyses in my book. I forgive their lack of real car handling engineering knowledge but can’t quite forgive that they don’t go out and find someone (say, any kid who did chassis design in an FSAE program at college) to explain it to them before they write the article and lord theory over us so much. For instance, they conclude that the 0.6″ lower CG height of the GT3 is not nearly as significant as the 20% less polar moment of the Cayman. Really? How do they know? One might ask: if the smaller polar moment is so important, why didn’t the Cayman R do better? Why did the two cars exhibit exactly the same yaw rate of 30 degrees per second if the Cayman has 20% less polar moment?

Seems like that should have been a hint that they weren’t looking at the problem correctly.

Then there’s the fact that the 911 was wearing vastly superior tires than the Cayman which makes the entire set of tests extremely suspect. Couldn’t they have at least put the same tire brand and model on the two cars at the stock widths and eliminated that glaring discrepancy?

OK, Fisher, if you’re so smart why don’t you tell us what really affects transient response, i.e. step-steer test results? Since you ask, I will, but I’ll need to refer to the following chart.

Here we have a plan view of a car with the Center of Gravity (CG) shown near the center and a big black arrow showing where the initial force comes in from the front wheels in to turn the car. The polar moment of inertia would be the sum of all the masses of the car times the square of their distances from the CG. That’s a nice thing to know and it does directly affect how fast the car will rotate once it is in a spin. The main problem is that when initiating a turn a car does not rotate about the CG.

If the car doesn’t rotate about the CG when a car begins to turn then the polar moment is of suspect importance when the subject is transient response.

When initiating a turn, say with the ISO 7401 step-steer test, which happens every time a car on a race-track enters a corner from a straight, the car actually rotates about a point that is back behind the rear axle. I have it labeled CR (Center of Rotation.) How far behind the rear axle is it? Using data from testing done by the National Highway Transportation Safety Administration (NHTSA) Bobier, et al, in a 1998 paper entitled Transient Responses of Alternative Vehicle Configurations, found that for 90% of all vehicles tested this point was between 1.39 and 1.96 times the distance from the CG to the rear axle, which is dimension b in the figure above.

For my purposes I simplify and approximate this into the formula c = 1.5 x b. I’ll call this equation 1.

(At this point anyone who doesn’t want to see how I do this stuff with equations can skip on down to the last equation.)

We can easily determine the value of b for any particular car by finding the wheel-base (WB) and the weight distribution on the internet, which is usually reported by the manufacturer or someone who has measured it.

where WB is the wheelbase and %R is the percentage of weight on the rear axle. Call this equation 2.

where Iy is the yaw inertia, wt is the weight of the car and c is the distance from the CG to the CR.

This gives an estimate of yaw inertia in terms of three parameters that we can easily find for any car.

Guess what car has a really short wheelbase and has it’s CG way back toward the rear and is only slightly heavier than a Cayman R? A 911GT3, that’s what car.

So, a mid-engined car can be expected to have faster response primarily because it will have more weight to the rear, not primarily because it’s weight is centralized. That’s why a front mid-engined car, like the fifth generation Corvette I have, is never going to have the response of a Porsche Cayman, even though its polar moment might be exactly the same. The mid-engined Lotus Evora has better response than the mid-engined Cayman because it has a weight distribution more rearward, like a 911, compared to a Cayman. (The Lotus designers knew what they were doing!) And if you get a car very light, with an extremely short wheelbase and make it mid-engined, well then you have a Toyota MR2 Spyder and when you step into it from your Corvette at the autocross you will run over each and every key cone until you get used to how incredibly fast it turns in!

This is what I use in my autocross speed rating system that some people know about. It gives an idea of the potential that a car has for having rapid transient response. Here are some selected results: 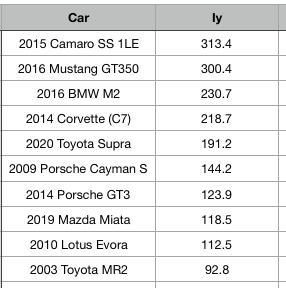