I’ve always assumed that there are parallels to be found between downhill ski competition and autocross. I never bothered to look into it, until now.

Full disclosure: I never became anything more than an intermediate recreational skier. So, you ski-racers out there can comment and tell me where I’ve got it all wrong.

Four main types of ski-racing events seem to exist at the world-championship level. The event called Giant Slalom (GS) most closely parallels autocross, I think. It runs about 1 second between gates, basically the same as an autocross slalom. The distance between gates varies a bit and sometimes there are two gates to pass on one side, but there are ranges for proper course design based on vertical drop. From Wikipedia, based on a formula: “… a course with a vertical drop of 300m would have 33 to 45 direction changes for an adult race.”

Maybe we could learn something about standardized course design for national autocross events from ski-racing.

The second type of event, Slalom, is shorter in length than GS with faster transitions and only about .82 seconds (I saw this number somewhere) between gates. I think this was the first type of ski-racing of the four to be established. Slalom transitions are faster than most, but not all, cars can achieve.

Of the two so-called speed events, Super Giant Slalom (Super-G) I’d say is most similar to Solo Trials and the Downhill is more comparable to road racing. The speed events have gates set farther apart, thus allowing higher velocities, are longer, have big radius turns and not much in the way of quick transitions.

From my brief reconnaissance of the sport, ski-racing technique has evolved rapidly over the last 20 years and maybe much longer. Much of this change has been driven by the evolution of equipment, in particular the advent of scalloped (side-cut) skis. As equipment got better humans have had to adapt their technique to take full advantage.

The ski-racing authorities have imposed limits on the equipment to keep things from getting out of hand, to keep things (somewhat) safe. They’ve had to impose minimum ski length and side-cut radii for each of the four types, for instance. They’ve had to change these requirements more than once. We call those “take-backs” in autocross, of course.

Something vaguely similar to equipment limits is happening in autocross. As power-to-weight ratios go up along with lateral-g’s in the lower prep classes, the courses at most venues have to necessarily get tighter to keep the maximum speeds in the safe range.

In general,  however, I’m not sure we can say that autocross evolution has been much driven by equipment evolution. While street tires have increased rapidly in performance, and street cars certainly handle better straight off the showroom floor than ever before, there have always been race tires and race cars at a much higher level of performance. That’s where most evolution due to technology has occurred. Someone with more knowledge than me will have to discuss whether better race tires have caused evolution in the classes where pure race tires are used.

Not that I think autocross is static. Far from it. I think it has been evolving fairly rapidly over the last 15 years or so. I think the best drivers of today are faster than those of 25 years ago. The reason? One word: data.

It’s almost comical what some people considered gospel 25 years ago. Data has cleared away a lot of the rubbish, the old wives tales, and the many ideas borrowed from the more mature sport of road-racing that just don’t apply to autocross. I think data is still driving autocross (and, for that matter, road racing) evolution today.

So, most of the talk/forums/instruction in ski-racing deals with human technique, and rightly so, especially since there are significant physical dangers in the sport, but there is some thinking about line and course strategy.

For instance, “high and early” vs. “low and late” discussions about apexing gates are common, especially with respect to the best line for beginner vs intermediate vs expert. Most teachers seem to recommend completing about 2/3rds of the turn prior to the gate, except for an expert skier who may do more of the turn after the gate. I’m sure the reader will recognize the direct parallel to autocross. I’ve done quite a bit of related data analysis elsewhere in this blog. Turning high and early is equivalent to late apexing in most peoples’ minds (not mine… I think that phrase should be banned from autocross as it is almost invariably misused) or, more properly, “back-siding the cones.”

I was particularly struck by the thoughts of Bob Harwood in an essay entitled The Road Not Taken- A philosophical approach to line and tactics, published on-line at modernskiracing.com.

Mr. Harwood writes “…what Bode [Miller] has taught us is that the old myth of one right line, the high line, is simply not true. Bode has learned that if he rocks his weight back a bit at the apex of his turn, he can ski a lower, tighter turn and still carve. Bode is able to bend the tail of the ski with more arc to carve a small radius turn with a high degree of confidence. Bode also has an amazing ability to shift his weight forward at the end of a turn so he can initiate the next turn smoothly and not get caught on the back of his skis at the start of the next turn. The end result: Bode’s balance and skills let him ski a lower, straighter line with less chance of DNF-ing than a more tradition skier…”

Sound eerily familiar? Race car driving has often been boiled down to the aphorism “The driver is simply a manager of shifting weight.”

Example: I recently co-drove a BS S2000 at the last two regionals of the year. I’d never autocrossed an S2000 before. The first event I wasn’t particularly fast. I focused on an efficient line and not spinning. (I spun anyway. But only once.)

Several places I took too slow of a line and dropped out of VTEC, which you really don’t want to do in an S2000 if you can help it. By the end of the day I had managed to get a feel for how much I could slither the rear of the car and yet not spin. I managed to beat the owner by a small amount but we were both down in the standings… I PAXed 17th of 112 and 8th of 9 in Pro, down from my average position.

In between events I watched a particular video (here) over and over again. This video shows a split-screen comparison of the best runs of Geoff Walker and co-driver Matthew Braun in an STR S2000 at the 2014 Wilmington champ tour.

Geoff  Walker is one of the guys from an adjoining region that I’ve always considered quite fast. I’ve been trying to match him for years. He trophied in STR at Nationals in 2013, one of the very toughest of classes.

Matthew Braun is simply one of the fastest autocrossers alive with multiple Solo National Championships and podium trophy positions. Lately he’s been 3rd in SSR in both 2015 and 2016, having been the SS National Champion in 2006, 2010 and 2012 and the A-Stock champion in 2003, just to name of few of his accomplishments. I’ve been lucky enough to meet him on occasion.

Walker was driving great, by my standards. As far as I can tell he only makes one slight mistake in the entire run, getting a little bit late in the first slalom. That’s it. Everything else is just perfect. Perfect, until you see what Braun does on the same course.

I see a consistent difference between the two. Braun takes a slightly smaller radius at each offset cone. He then rotates the car while going past and is able to get on the throttle earlier as a result of the car being pointed in the new direction sooner. He walks away from Walker with a higher average speed (and possibly a shorter distance traveled) at every point in the course.

Braun and Miller: Both take a tighter radius by controlling weight shift. Braun manipulates weight over, and lateral forces at, the rear tires and gets them to slide at just the right spot and rotate the car during a tighter radius turn. According to Harwood, Miller manipulates his body weight, bending the rear of his skis more, allowing him to carve tighter at the apex and take a more direct, and thus faster, downhill line. The parallelism between these techniques is striking to me.

Cause and effect are often difficult to sort out in autocross, but the 2nd event in the S2000 I beat the owner by a much larger margin, took 2nd of 6 in Pro and PAXed 6th out of 74. This is about normal for me, maybe even better than normal. 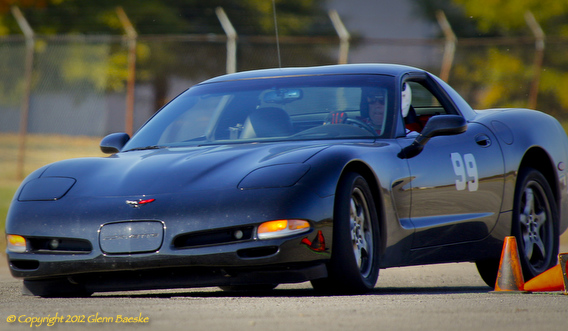