Many course designers will include a sucker cone. Reader DeWitt had some really good comments on an earlier post and submitted a photo of the finish of an autocross he did (last year with ETRSCCA?) that’s a perfect example.

The figure below shows the section leading to the finish. The orange dots represent the approximate position of the cones and the white line is DeWitt’s path from his data. (Remember that everything in the following figures is approximate… don’t get hung up on preciseness.) I added the black lines to show how I think of the “shape” of the course boundaries. I try not to reduce autocross courses to road-courses, but we will cover that in a minute. The inside corner cone conveniently circled in orange near the bottom is the “sucker” cone. 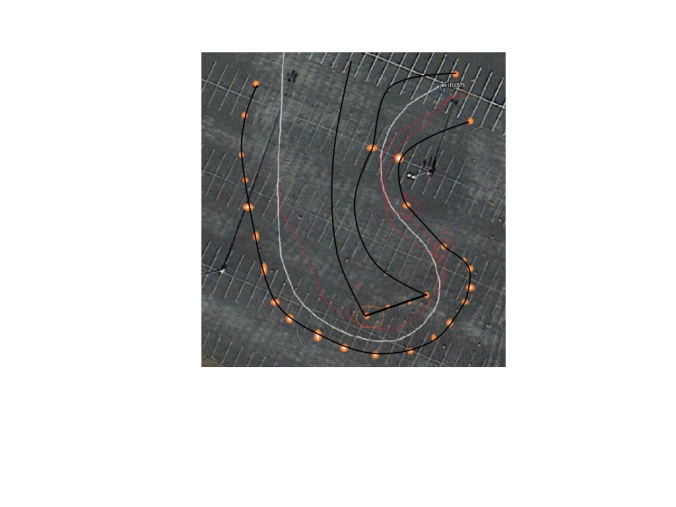 Dewitt, in my estimation, did well to ignore the “sucker” cone. Folks that took the bait drove a line more like the red one in the figure below. By doing that, some got into a problem at the end of the straight line of cones where they had to slow severely to negotiate what turned out to be a severely decreasing radius. Reader Dewitt thinks the red path was slower than the one he took and he is probably right, especially if they took too fast and direct a route along-side the straight line of four cones on the inside of the corner.

What do I think I would have done, if I had been as smart as I am sitting at this desk, all cloaked in warm hindsight? Something like the figure below, I think, which has two major differences from the white path actually taken by DeWitt. 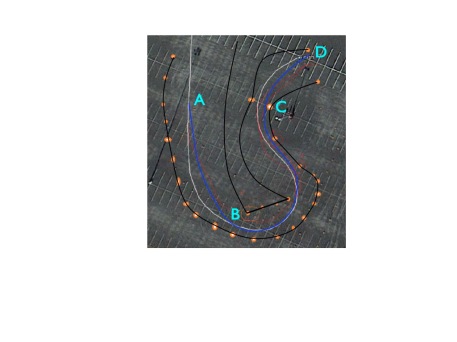 I would have departed from the white line at A, continuing to accelerate longer, taking a more direct and faster route to B. (This is almost, but not quite the same as the red path in the earlier figure. It also depends on there not being other limiting cones, not shown.) Before B I would have braked very hard to get down to the speed necessary to rejoin the white path from B onward. So, I think I get to B in less time and then go around at the same radius and speed thereafter.

This is actually a really good example of open vs. closed course design. Many clubs would have mandated the white path with more cones, forcing everyone to take the same path. By leaving it open, this club encouraged the competitors to think about what they wanted to do and what they thought would be the faster line.

The other difference is that I would have been tight on the cone at C, which means my arc past C is bigger and therefore faster, on my way to an accelerating finish at the same spot as the white path, but at a different angle. This assumes my car accelerates strongly. If my car is very low-power, I might take a tighter arc from C, ending right of center at the finish, cutting the distance to the finish as much as possible.

One other point: reader DeWitt characterizes the white path as a “late-apex” path. I disagreed. This is a good opportunity to explore this question.

To figure this out, I have drawn a more-or-less constant width track through the cones. I then draw in what I think would be a road-race late-apex path through the course, as shown in green.

If I were doing a track day, faced with the track boundaries shown in black, and wanted to late-apex this corner, I would actually double-apex it, first making an apex at A and then another at B. Beyond A the car is still going very fast, at some point trail-braking into C. To form a very late-apex, one drives a path that goes down to C, which allows an early acceleration point and increases the length of the “straight” beyond B. Now, no one should do this because there is no significant straight beyond B, just another connected curve, so it would waste time to take the path at C. If there were a long straight beyond B, this is exactly the path to take as it will decrease lap time overall.

So, I leave it to you guys to decide whether the white path is a late-apex path or not, or whether both are late-apex, with the green path just very late, having made the apex (the closest spot to the inside of the track) beyond the last cone in the wall of four cones. I call the white path the “momentum maintenance” path. It makes an apex before the last cone of four in the wall. I think it is basically correct except for the revisions I mentioned.